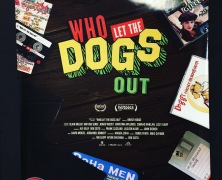 Director Brent Hodge very aptly captures the hilarious adventure of Ben Sisto’s quest to get to the bottom of “Who Let The Dogs Out.”  A subject definitely off the beaten path, it starts naturally enough with Ben noticing an incomplete citation on the songs Wikipedia page and he sets out the find the answer.  Who did let […]

The Toronto International Film Festival® announced its award winners at the closing ceremony at TIFF Bell Lightbox today, hosted by Piers Handling, CEO and Director of TIFF, and Cameron Bailey, Artistic Director of TIFF. To watch the presentation, visit tiff.net/ceremony. The 42nd Festival wraps up this evening. The short film awards below were selected by […]

Images By A.J.Lam The opening party for The 5th annual edition of The ICFF was held at The Roy Thompson Hall in the heart of downtown Toronto. A fine selection of contemporary Italian film was showcased to audiences in Ontario and Quebec. In Toronto, Vaughan, Hamilton and Niagara, the Festival takes place during the celebrations […]

The Caribbean Tales Film Festival (CTFF) celebrates the talents of established and emerging filmmakers of Caribbean heritage who practice their art across the Caribbean and worldwide – including the Caribbean, Europe, the Americas, Africa, China, India and the Middle East. CTFF presents a multi-ethnic mix of exciting and dynamic films that showcase diverse shared stories […]

By A.J.Lam The closing film of the 4th ICFF, Sei Mai Stata Sulla Luna?, directed by Paolo Genovese, was screened before an enthusiastic full house at the Bell Lightbox on June 19, 2015, after special awards were presented to Mischa Barton, with an Award of Honour, and to Andrea Iervolino with an Honour of Recognition […]