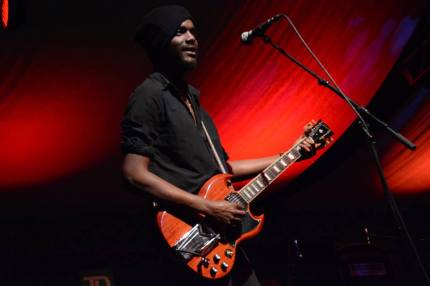 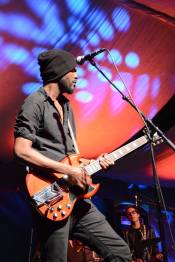 Austin, Texas guitarist Gary Clark Jr. a guitarist since the age of 12, played to a capacity crowd at The Toronto Jazz Festival on a rainy and windy Saturday night. Probably one of the biggest crowd during the 2015 version of this festival.
A naturally humble and shy man, Clark was situated on the left side of the stage, rather than the centre, with drummer Johnny Radelat next to him, then bassist Johnny Bradley. 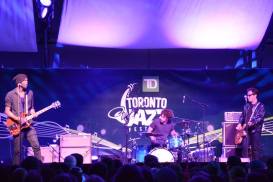 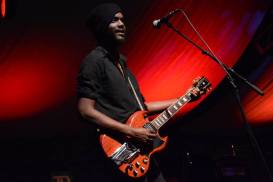 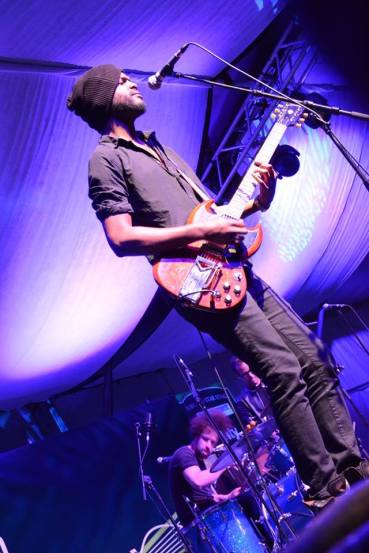 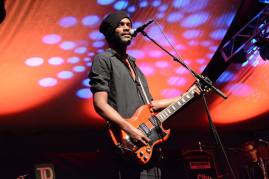 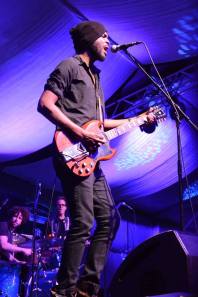 Clark began laying down blues riffs and the rest of the band fell into place. The sound was good underneath the tent we were in and the band sounded tight for the concert tonight.
Clark changed guitars multiple times and he joined in playing a riff as the band rocked its way through Ain’t Messin’ Round. Gary reached for his wah wah pedal for this one giving the fans something to cheer about.
The first part of the show built up to Don’t Owe You A Thing, a performance that really brought the energy level up. The high-speed boogie number saw the guitarist letting loose.
Then Clark broke into a soulful falsetto for Please Come Home. The 1950s-style ballad with a twangy guitar solo. Then it was time to rock along to the Chuck Berry-like Travis County, during which Radelat took a brief, but stirring drum solo.
A big high light of the night was a tribute to Mr. B.B.King who passed away just recently. Clark said” If it weren’t for B.B. I wouldn’t be here” after covering 3 O’Clock Blues. 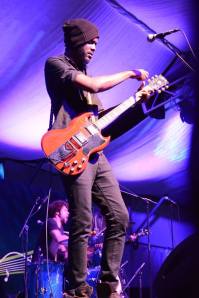 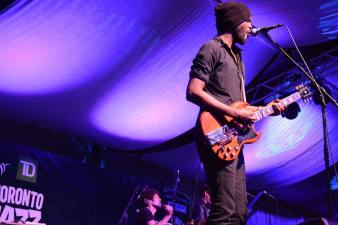 Gary Clark Jr returned alone for the encore, introducing an unnamed new song which turned out to be a song called “Church” that featured just Clark’s voice and his electric guitar. It took a little of his momentum away but he made up for it in the next two encore songs: “The Healing” and “If Trouble Were Money” brought the fans back on their feet and ended a soggy,rainy and windy Saturday night during Toronto Jazz Festival 2015.
This may not have been what his fans were expecting, or wanting, but they listened respectfully.
A headliner, he gave himself and his fans plenty of time to see that he is more than just a Hendrix, Chuck Berry or B.B.King clone. Some folks may have wanted more guitar solo, but that doesn’t seem to be Clark’s true train of thought. Instead, he showed the full range of the jazz, soul and blues.
Set List:
Blak and Blu
(partial)
Bright Lights
Ain’t Messin ‘Round
When My Train Pulls In
Hold On
(New Song)
Our Love
(New Song)
Numb
Next Door Neighbor Blues
Catfish Blues
(Robert Petway cover)
Don’t Owe You a Thang
(Unknown)
3 O’Clock Blues
(B.B. King cover)
Travis County
Please Come Home
Encore:
Church
The Healing
If Trouble Was Money