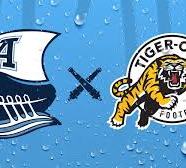 Posted by BK on September 4, 2022 in celebration, Events, Showcase | Leave a comment

What a rivalry! The Hamilton Tiger-Cats have sold out the Labour Day Classic against the Toronto Argonauts. The CFL game will be an amazing clash of titans !

The game is slated to be played on Monday, September 5 in at Tim Hortons Field, marking the fourth and final meeting between the two storied rivals in a five-week span.

In addition to the entertainment on the field, the Ticats have also revealed that multi-time Juno Award nominee Tim Hicks will perform for the crowd at halftime.

Despite the announced sellout, a handful of additional tickets have been released for the standing room social section in the endzone.

The Argonauts currently sit atop the East Division with a record of 5-5, while the Tiger-Cats are battling to get back into the playoff picture at 3-8. Toronto currently leads the season series 2-1.

Support the CFL and we can’t wait to attend the Grey Cup.